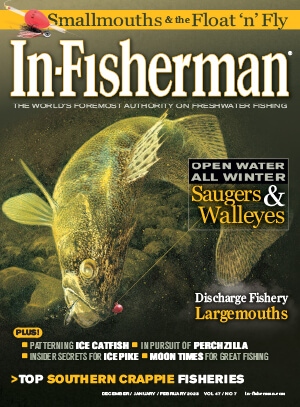 Lake Fork Does It Again: Third Toyota ShareLunker of Season Randall E. Claybourne of Tulsa, Oklahoma, was fishing by himself in 15 feet of water in the east arm of the lake when the 13.86-pound bass took his jig-and-craw lure about 11:20 p.m.

The fish was 25 inches long and 21 inches in girth. It was held for pickup at Lake Fork Marina, an official Toyota ShareLunker Weigh and Holding Station.

Anyone legally catching a 13-pound or bigger largemouth bass from Texas waters, public or private, between October 1 and April 30 may submit the fish to the Toyota ShareLunker program. Fish will be picked up by TPWD personnel within 12 hours.

Anglers entering fish into the Toyota ShareLunker program receive a free replica of their fish, a certificate and ShareLunker clothing and are recognized at a banquet at the Texas Freshwater Fisheries Center in Athens. The person who catches the season’s largest entry will be named Angler of the Year. If the Angler of the Year is a Texas resident, that person also receives a lifetime fishing license.

Official ShareLunker weigh and holding stations have been established at a number of reservoirs; a list is at http://www.tpwd.state.tx.us/spdest/visitorcenters/tffc/sharelunker/holding/.

For complete information and rules of the ShareLunker program, tips on caring for big bass, a list of official Toyota ShareLunker weigh and holding stations and a recap of last year’s season, see www.tpwd.state.tx.us/sharelunker/. The site also includes a searchable database of all fish entered into the program along with pictures where available.

Information on current catches, including short videos of interviews with anglers when available, will be posted on www.facebook.com/sharelunkerprogram. “Like” this page and you can receive notification and photos of catches as soon as they become available.

The Toyota ShareLunker Program is made possible by a grant to the Texas Parks & Wildlife Foundation from Gulf States Toyota. Toyota is a long-time supporter of the Foundation and Texas Parks and Wildlife Department, providing major funding for a wide variety of education, fish, parks and wildlife projects. Toyota also sponsors the Toyota Texas Bass Classic world championship of bass fishing, which will be held at Lake Fork in May 2014.